Made it to Auckland

Well Sarah and I made it to Auckland, longest flight ever from LAX to Auckland international! The flight itself was alright. At this point I wouldn’t recommend United Air to anyone as they over booked the flight and Sarah didn’t have a seat. After asking people to give up their seat for $400 credit and a hotel in Boston, Sarah had a seat given to her but on the other end of the plane. After asking if the guy next to me was willing to switch with Sarah so we can be together, very nice act of kindness that you don’t always see. People seem to be nice to you when you explain that you just got married and are going to your honeymoon. LAX is bigger than Logan airport, to the point where you have to take shuttles to the other terminals. It took us longer to get through security than in Logan, but besides that everything else was uneventful. I got some food as I was starving…good old Burger King! ;)

After getting to Auckland we had a long wait to get through customs, a cool thing as we were waiting though was Auckland is having some rowing races and we got to see a good number of teams from around the world. Also behind us in line we’re was sure was a rugby team. Getting through customs seem to take some time but there were no issues, just a wait. We made our way out we were able to find taxis. We found a driver that move from the states to New Zealand, she lived in Honalulu and moved 8 years ago. It was nice chatting with her, she should go into selling New Zealand to outsiders as she made it sound really great to live here. 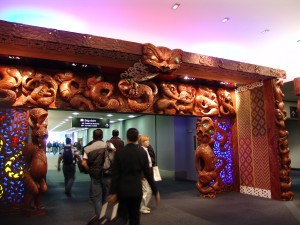 Getting to the hotel we could check in but needed to wait for the room to be cleaned as it was a bit before their check in time. As we waited for the room to be cleaned, we walked around to a nice park, Albert Park, outside The University of Auckland. We hung out there and just enjoyed the nice weather. The Hotel is very nice and somewhat formal, which does not fit my character at all. I kind of giggled inside as this place is really fancy, they got our bags from the car, open doors for us and sent us a gift because we are here on our honeymoon. We got a nice bottle of champagne send to the room, which Sarah and I promptly drank! (Well, mostly me!). After getting in to the room and we showered and hang out for a bit until supper time! The hotel has its own restaurant inside which we chose to eat at that last night, because we were still adjusting to the time difference. The food was very good. I had a organic penne, and Sarah had a beef something that was very hard to pronounce (and spell). 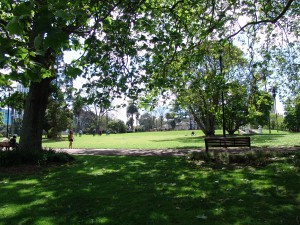 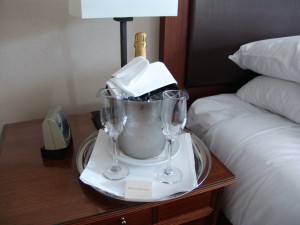